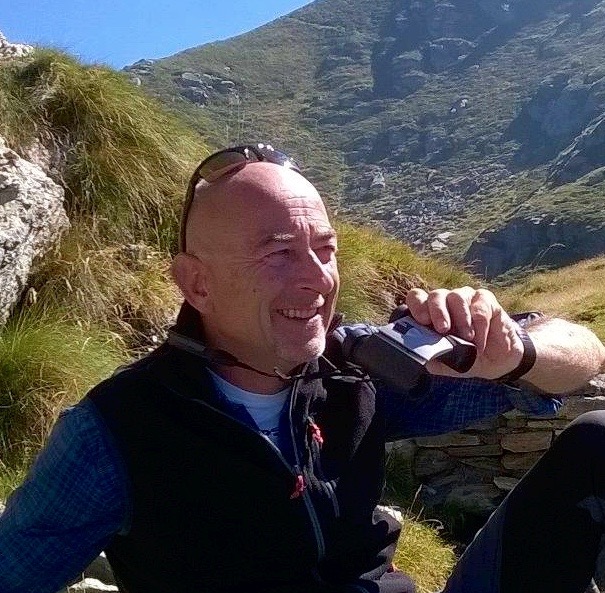 I had my first walk in the mountains when I was 25 and it’s still well impressed on my memory. It was a cool, sunny day in August and I walked for around two hours in a wood, along a nice, large track, enjoying the bird songs and the wood fragrances. At the end of that walk I was incredibly hungry, on one side, and on the other side I had a new deep feeling of well-being, totally unknown to me. An abundant meal stopped my hunger pains whereas that special, curiously positive feeling continued until late that night!

Afterwards I’ve spent many summer holidays in those mountains, quite close to the Austrian border, each time enjoying that amazing feeling. The longer I walked the deeper and stronger it got. I experienced the Mountain in many different ways, walking any kind of footpaths, wide and narrow, easy and dangerous, climbing exposed via ferratas as well; I also did sport climbing for a certain time. And I learned to respect the mountain.

In the late 1990s I saw Lake Orta for the first time and it really struck me, an amazingly peaceful place where time seems to have stopped. In 2005 I decided to move here from the city, more and more enchanted by the beauty of nature of this romantic lake.

In 2014 I passed the exams to become a licensed Hiking Guide and since then I’ve made of walking and leading people through nature my profession.

I mostly work as a Hiking Guide in the Lake Orta area and in the north-eastern Dolomites.

“However far you go, however high you climb, you must begin with a single step.”
Francois Cheng
MY PASSIONS
nature
excursions
nordic walking
cooking
psycology
MY IMAGES
MY ASSOCIATIONS